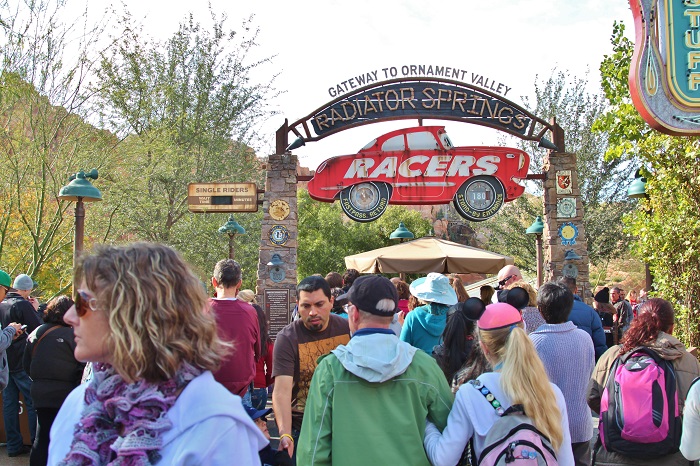 Without question the hottest ride at Disney’s California Adventures is Radiator Springs Racers. During the 2012 Christmas season the standby line was consistently between 160 to 220 minutes long so getting a fast pass seemed like the best way to go. We put together our fast pass strategy weeks in advance to make sure that we would get on the ride. Knowing that we would get one early entry morning, we planned our RSR day for January 2nd, which we thought would be the lightest day of our trip. If things went as expected then getting in an hour early would give us a chance to not only grab a fast pass but possibly even get us on a couple of times first thing in the morning.

They’ve had early entrance for many years now but we’ve never once taken advantage of it because we aren’t morning people. This time we toughed it out and dragged our rear ends to the park for 7am just to get those valuable fast passes. When we got there, bleary eyed and groggy, we found out that between the 4 experienced adult Disney travellers in our group we weren’t half as cleaver as we thought we were.

This is the kind of thing that I used to be on top of but has now passed me by. Disneyland Resort has two different early entry options. Extra Magic Hour is not the same thing as Magic Morning. Magic Morning allows any guest who has a 3-day or longer pass to get into Disneyland one hour early on one Tuesday, Thursday, or Saturday while their ticket is valid. Extra Magic Hour allows Disney hotel guests to get into Disneyland an hour early on one or more of those days plus it allows them to get into California Adventures an hour early on Mondays, Wednesdays, Fridays, and Sundays. 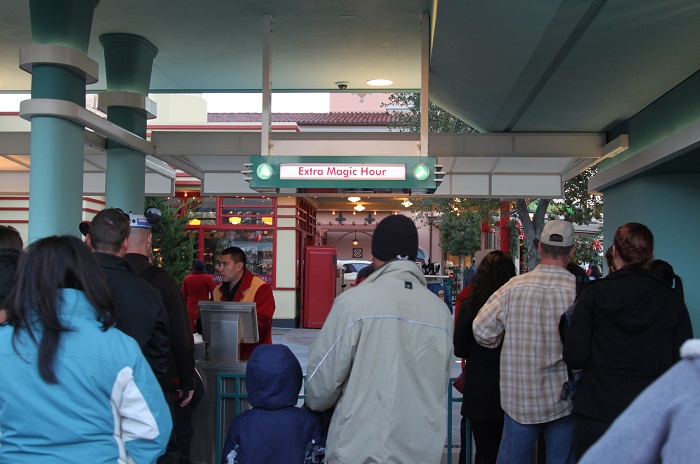 The last time we came to Disneyland was in the off-season and we stayed at an on-property hotel. For this trip, being in peak season, the on-site hotels were at peak pricing so we stayed at the Hyatt and thus did not have Extra Magic hour.  It turned out that we could not get into California Adventures before regular opening. And so we waited. Disney should consider running a coffee cart in the plaza.

Lining up for Radiator Springs Racers

By around 7:20 a decent crowd had started to form outside the less magical entrance to DCA so we jumped in a line. The lines continued to grow behind us and at around 7:40 they started letting people through the gates and into the rope-drop waiting area. If you’re not familiar with the rope drop areas they are where Disney allows guests through the gates early but holds them in waiting areas behind ropes until the park opens. At park opening the rope is taken away and people rush to their first destination.

Secrets, Tips, and Tricks: Get in the line closest to the Extra Magic Hour gates because they start changing those over to regular entry gates just before they start letting people in.

After getting through the gates we speed walked to the Radiator Springs Racers fast pass line. Having been one of the earlier guests we were about 30th in line. Again we waited. Of course, all of the Extra Magic hour people were still ahead of us but we were confident that we’d get an reasonably early fast pass. The RSR fast pass line is to the left of the main rope drop area next to the Carthay Circle Restaurant. We had a great view of the rope drop and the large crowd of people gathering there. The fast pass line grew behind us and went around the corner so we had no idea how long it was, but we had a lot of people ask us what line we were in and then seemed very disappointed when they realized that the line-up was already insane well before 8am. Too bad for them that they might be faced with this: 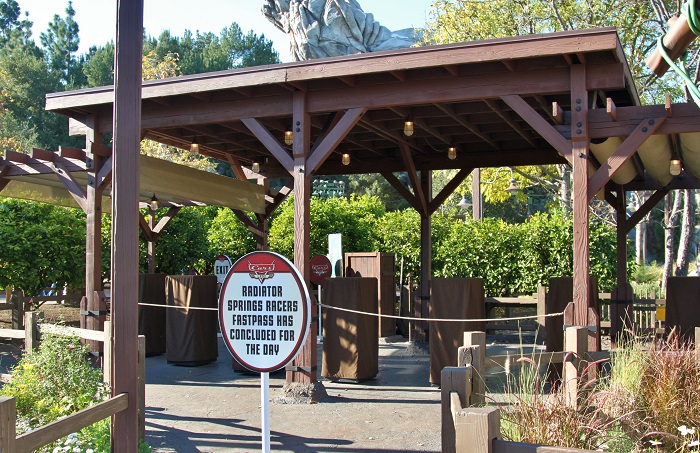 At 8am the ropes dropped and while our orderly lineup was carefully and slowly lead to the fast pass machines we could see the mayhem developing for general entry. They had Disney bouncers all along the way asking people not to run but it looked like the start of a marathon. There was no outright sprinting yet I was still a little worried for some of the toddlers who were not in strollers. After a short walk towards the fast pass machines outside A Bugs Land we ended up in line behind all the Extra Magic Hour people and waited some more. The line moved slowly but steadily and by around 8:30 we received fast passes for noon. In addition to the fast passes, we also got to take some nice early morning pictures like this one of Grizzly Peak in the morning light: 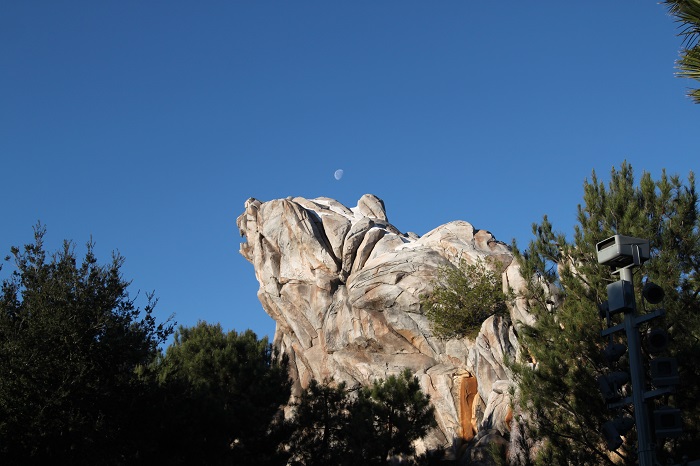 I blame this on the fact that we were still groggy, but we didn’t think about it until far too late. After standing as a large group near the front of the RSR fast pass rope drop line we finally realized that we should have sent part of our group over to the stand by line. Duh. We split up just before rope drop and we met up with them at around 8:35. In the end this timing worked out pretty well because they were still far enough back in line that we could easily meet up with them. Had they gone in earlier they would have been deep inside the queue and we would not have been able to get there. We estimated that there were around 90 minutes of line-up in front of us but the strategy failed suddenly because about 20 minutes later the ride was hit with technical problems and the standby line disbanded.

Secrets, Tips, and Tricks: Pick a sacrificial lamb to line up for all the fast passes and send the rest of your party to the front of the rope drop area. The lamb may not get to ride so buy them all the churros they want that day.

We finally ended up getting into the Fast Pass lineup at around 1:30pm and the standby wait was about 30 minutes long. While in line I did some quick math and realized that we got the the Disneyland Resort Plaza around 6:45 and waited an hour to get into rope drop, and then waited another 45 minutes for our fast pass. Add another 30 minute fast pass line wait and we ended up waiting around 135 minutes for the ride. Yes, that was shorter than the standby line but in the grand scheme of things not by that much. As people who don’t usually like to get up too early, I wondered out loud whether or not it was really worth it all. A member of the group in front of us turned around and mentioned that they just came to the same conclusion a few minutes earlier.

So is it worth all the trouble to get fast passes for a hot ride like Radiator Springs Racers first thing in the morning? If you are risk averse and don’t mind waking up early then it would recommend doing it. If you’re willing to gamble a little then waiting for a good standby window might be better. If I could do it all over again I’d plan my early entrance day for later in my trip and keep an eye out of an acceptable standby time prior to that. If I can get on the ride without a fastpass then I could save myself and early morning, but if the standby is consistently over 3 hours I’ll go through this all over again.

Do you have any tips, tricks, or stories on getting fast passes for popular rides? Please share in the comments below!

10 thoughts on “Getting Fast Passes for Radiator Springs Racers”